< Artists
Victor Laks was born in 1924 in Chatillon-sur-Seine (Hauts de Seine). He starts drawing very young, encouraged by his own but will refuse to join the School of Fine Arts. He trained in Emile-Othon Friesz's studio and took classes at the Louvre School. At the end of the Second World War, he decided to break with the old continent and exile himself to the United States. The school in New York is in the making. In parallel with his continuing work, he taught painting at the University of New Mexico, in Albuquerque very precisely, where he exhibited in 1948. During these years he traveled to Mexico - with Oscar Gauthier in particular - to the New Orleans and Brazil. He exhibited in Rio in 1949. In 1950, he returned to New York where he taught at the French High School and at New York University. He then continued his personal exhibitions in various New York galleries, including the Galerie Moderne in 1953 and the Wildenstein Gallery in 1954. He also made trips to France during which he met Michel Tapié, Georges Mathieu, Pierre Soulages and Camille Bryen.
The works of this period are characterized by a constructed expressionism, the palette of which refers to that of the wild beasts. But already his subjects exceed the objective reality.
1955 is the year of his definitive return to France and his break with figuration.
For Laks, the capital is a center open to all horizons whose poles are getting closer. His studio in Villa Saint-Jacques with its hidden garden is the symbol. From this place start several axes: the one that leads to Cérès Franco, Brazilian passionate about 'primitive' art and who likes to entertain artists and collectors in his apartment in the rue Quincampoix, located above his gallery, L'Œil de Bœuf , a cosmopolitan crossroads where he exhibits in a group. There is the path to Gildas Fardel's home for Bozzolini, Huguette Arthur Bertrand, Fichet, Seund Ja Rhee and Laks. On the walls of his apartment, the works of his painter friends rub shoulders with the Kandinsky, constituting the collection that this great art lover bequeathed to the Museum of Nantes.
Through the fair of Realities News to which it exposes regularly since 1960, it is connected with the Romanian colony Alexander Istrati, Natalia Dumitresco, Brancusi. (...) Finally there is the office of Michel Tapie at the Stadler Gallery, rue de Seine, a pivotal cosmetic empire through America, Japan, Iran, Italy and especially Turin where he Founded the 'international Center of Aesthetic Research' Universe 'outsized' for Laks who exhibit in 1968 (catalog prefaced by Michel Tapie) kind of informal international art where prevail gesture, stain, Sign to lead to an enchantment.
Member of groups V then Signs / Spaces / Sets of signs, he is also co-founder of associations Art & Prospective and Limitrophe. The undeniable mural presence of Victor Laks' works has often made them associate with architectural integration ensembles.
The work of Victor Laks is crossed by periods. First figurative, she moves towards abstraction, an evolution that he comments as follows: 'Painting, I discovered a painting that I did but which, at the same time, of itself was made ... I had to, therefore, detect the ways and the springs of an essential dynamic that exceeded me'. This new practice of painting leads him to tame the forms. Between stable structures and movements, between density and 'spared areas' (Victor Laks), between painting in gray tones, brown sometimes blue and then radically black and white born a world in tension.
From 1968, the color returns and his paintings, his washes, gestures in their general movement, then appear as plant proliferations, networks of black lines intertwining indefinitely until occupying the entire space of the surface.
His way is remarkably personal, if one finds traces of gestural painting, dripping and even street-art, his writing evolves according to the periods but remains present and immediately identifiable. 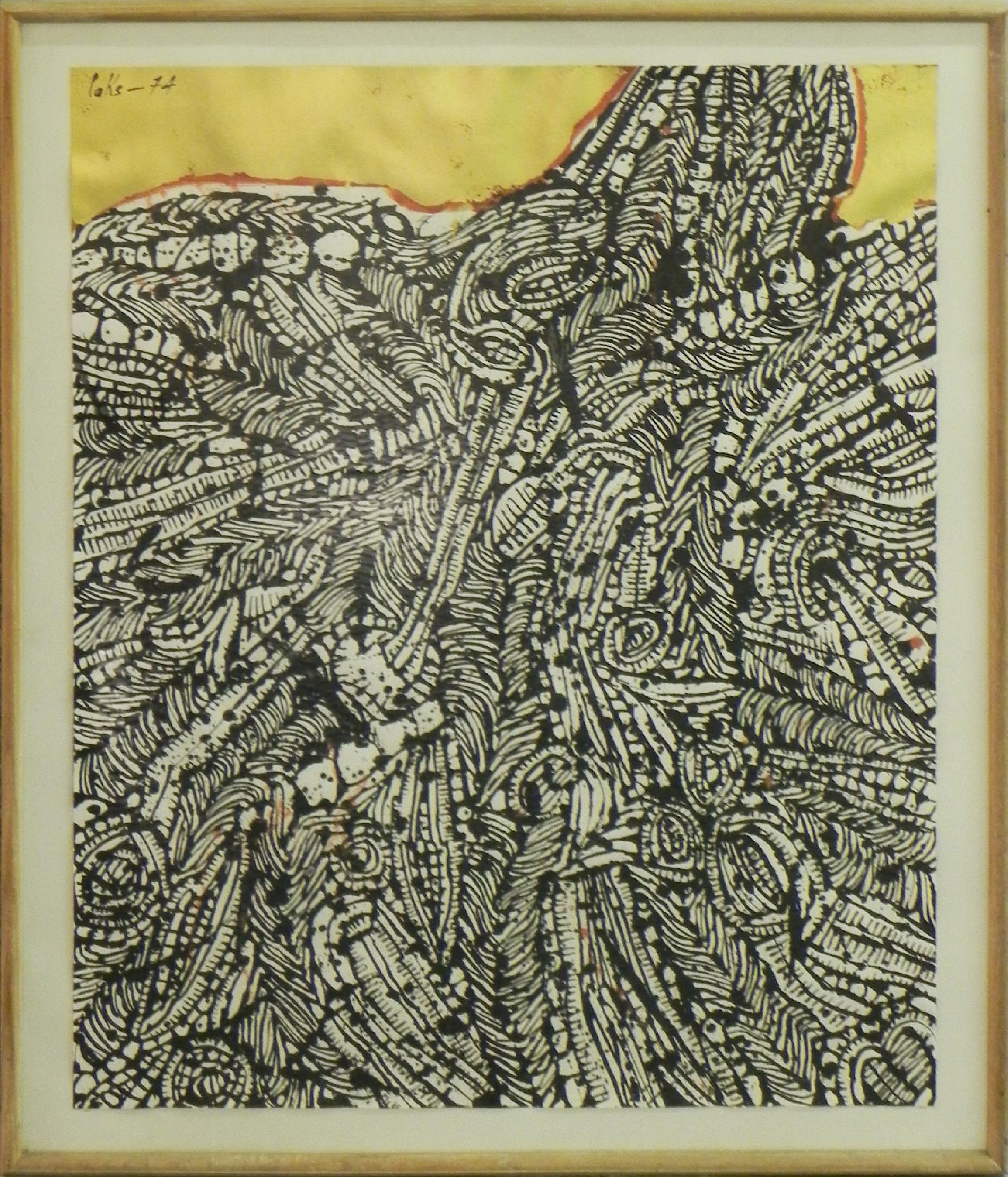 Signed, and dated on the upper left, titled, dated and countersigned on the reverse
Drawing
65 x 50 cm

Victor Laks's drawing promises to be an emergence phenomenon, not born but born. It is decoding, deconstruction of code which, from the start, turns around to become encryption for another stranger. Take everything away, that still-unassigned; there, figures that make up the lines of buried forces, the surge of stifled conflicts and the knots of desires. The contradictions thus betrayed are amused in the acute dialectic of black and white (denial of gray), of the fixed and the moving (refusal of the immobile), of the full and the void (horror of the void). Imperative postulate of the baroque when the movement dooms the forms to tireless metamorphoses, to expansions which, as if to disavow the limits of the constraining sheet, throw the dimensions adrift. Swirls. Loops and tendrils, sinuses and spirals. Vortex. Dizziness of an imagination drunk with space: to see in their flight the lines of the drawing embracing the universe. Space of the sheet, space of a present, space of an instant ... Mirror sheets too, surfaces capturing chimeras reflections of ephemeral evidence. Multiplied, they confirm, combine, exchange in continuous progress their words to signify and to sign a quest which, without outcome or prologue, returns to its object only to lose it, pursue it again. 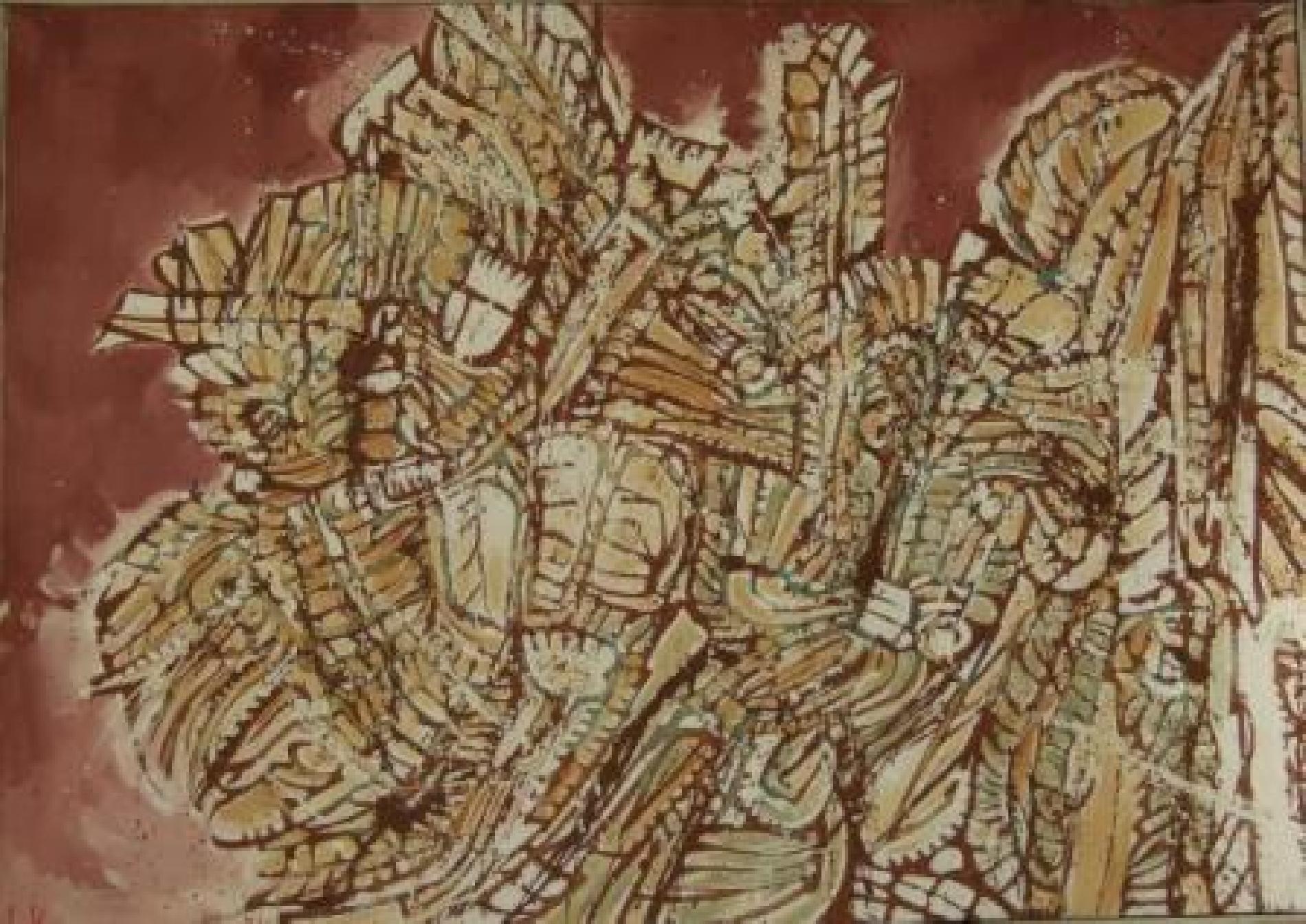 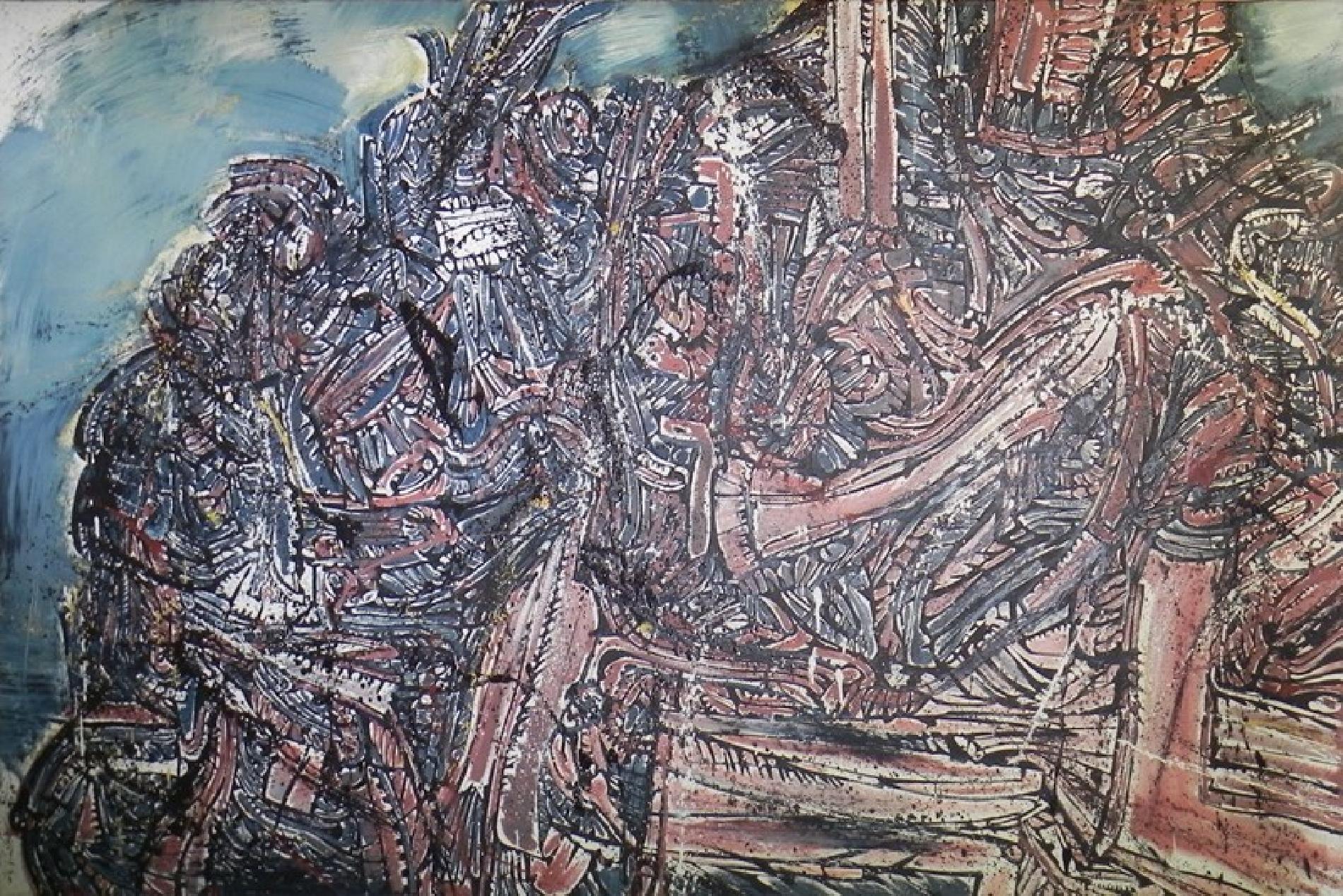 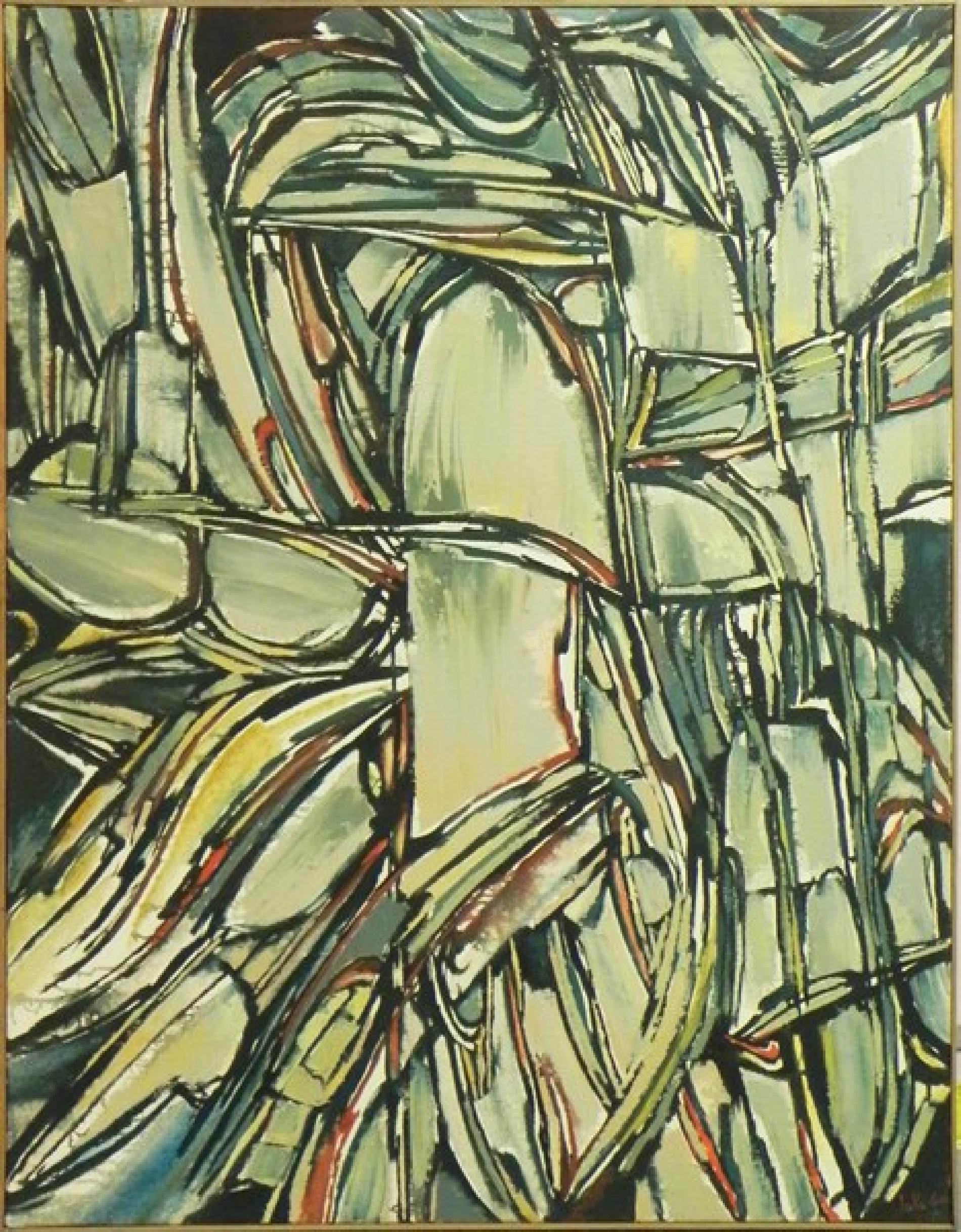 signed and dated at the bottom left, countersigned, titled, dated and located on the reverse
drawing
32 x 26,5 cm 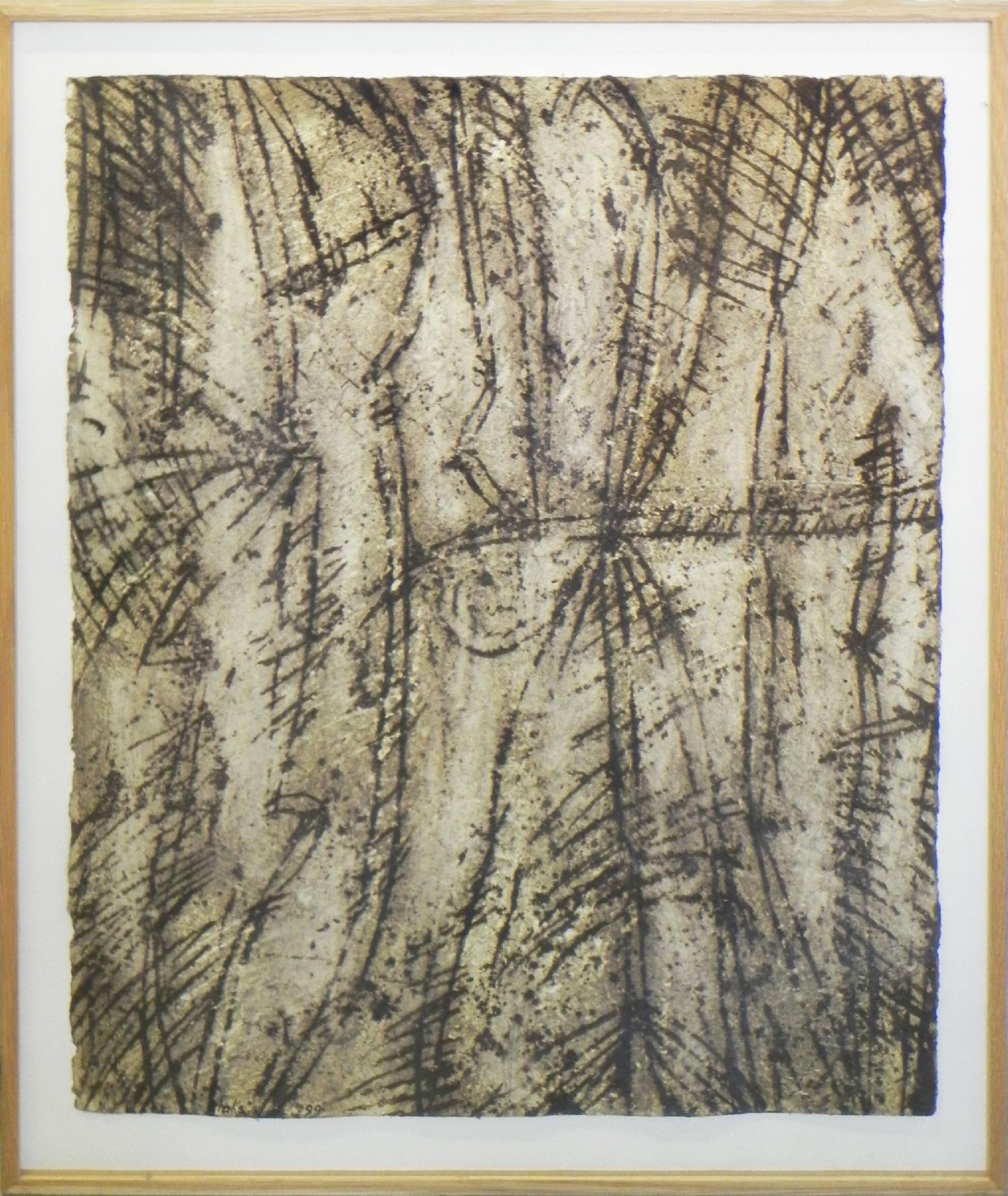 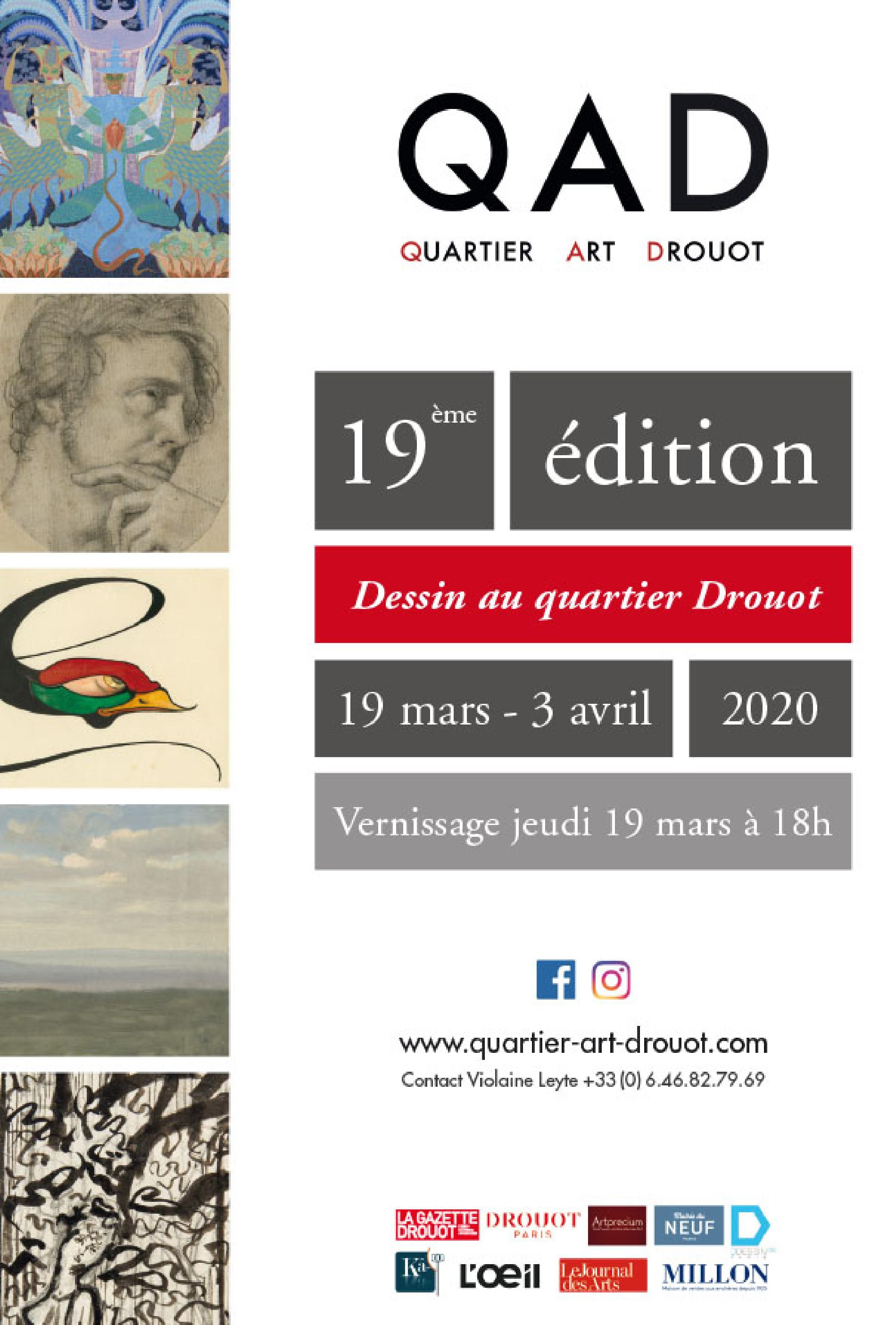