< Artists
Willy Anthoons was born on March 25, 1911 in Mechelen (Belgium). At the age of three, in August 1914, he fled with his mother the war ravaging Europe; They settle in London. His father, Louis Anthoons, mobilized for the Great War, is held prisoner by the Germans in Holland. The young Willy begins his schooling in English schools, he will keep an excellent command of the English language. At that time, he is already shaping the heads of his classmates with modeling clay, which may have already suggested the sequel.
Returning to Brussels in November 1918, he attended evening classes at the Saint-Luc school in Schaerbeek from 1923 to 1927, and continued his studies from 1927 to 1931 and in 1936-1937 at the Académie des Beaux- Arts of Ixelles then at the Higher Institute of Decorative Arts. His teacher is Oscar Jespers. During his military service 1931-1932, he managed to carve. The military authorities are conciliatory towards him after the good idea he has to make the busts of his officers. Until 1940, he never stopped carving portraits, nudes, and maternities. We can already see him rebelling against academicism little by little.
Mobilized in 1940, his regiment is stationed along the Albert Canal (Belgium) in anticipation of an attack by the German army that does not come. Following the unsanitary conditions of the military quarter, Anthoons falls seriously ill and is sent for five months in convalescence in the south of France, Nimes and Antraigues-sur-Volane in Ardeche where he draws, paints and sculpts. Back in Belgium, he turns away from figuration. In 1945, he co-founded the Jeune Peinture belge, which has numerous exhibitions all over Europe. At the Kröller-Müller Museum he discovered Mondrian's paintings, and in 1946 he met the sculptors Laurens and Adam in Paris.
Anthoons presents a first personal exhibition at the Palais des Beaux-Arts in Brussels in 1945, three others follow in 1951, 1954 and 1957. He moved to a studio in Charenton-le-Pont, near Paris in 1948.
He is associated with the painter Geer van Velde, the writer Michel Seuphor and the sculptors Gilioli, Lipsi, Vitullo. He exhibited at the Salon of Young Sculpture, the Salon of New Realities, the Salon of May and the Salon of Abstract Sculpture. In 1950, he traveled to Italy, Spain and Brittany and worked with sculptors Arp, Schöffer, Calder and Hajdu, painters Luc Peire, Alechinsky, Manessier, Eudaldo Morales and Jean Le Moal. In 1950, he was knighted by the Order of Leopold II. Exhibiting regularly throughout Europe and participating in the biennales of São Paulo, Antwerp-Middelheim, Sonsbeek and Yverdon, Anthoons teaches art at the Estienne School. As a result of a neurological disease that developed from 1968, the dexterity of his gestures is gradually annihilated, he interrupts his work in 1977. In 1974 he exhibited at the Ariel gallery, continues to draw projects of Sculptures that will not be realized and he died in Paris in December 1982 and rests in the Valmy cemetery of Charenton-le-Pont where one of his sculptures was placed on his grave.
The works of Willy Anthoons are present in many museums of modern art (Antwerp Museums - MRBA and Middelheim, Brussels, Liège, Verviers, Otterlo, Paris, Basel) and private collections.
The work Anthoons created steles made of wood (oak, olive, pear, ebony and various exotic woods), stone and bronze, as well as suspended mobiles in folded and polychrome aluminum. He has also participated in the decoration of several churches, especially in Brittany.
Museums Paris, National Museum of Modern Art Brussels, Royal Museums of Fine Arts of Belgium
Antwerp, Middelheim Otterlo, Kröller-Müller Museum: Infinite form, 1949.
Stained Glass Carmelite Convent, Villa de la Reunion (47, rue Chardon-Lagache, Paris XVI), with the collaboration of Elvire Jan, Jean Bertholle, John the Moal, Alfred Manessier and Hans Seiler, 1962.
Drawing Paul Arma, Small suite for quartet or string orchestra, op 128.
Bibliography Willy Anthoons - Monographs of Belgian Art by Michel Seuphor (De Sikkel, 1954). Willy Anthoons - The Spirit of Matter / De Geest van de materie by Marcel Daloze (Philippe Samuel Gallery, Paris 2012) 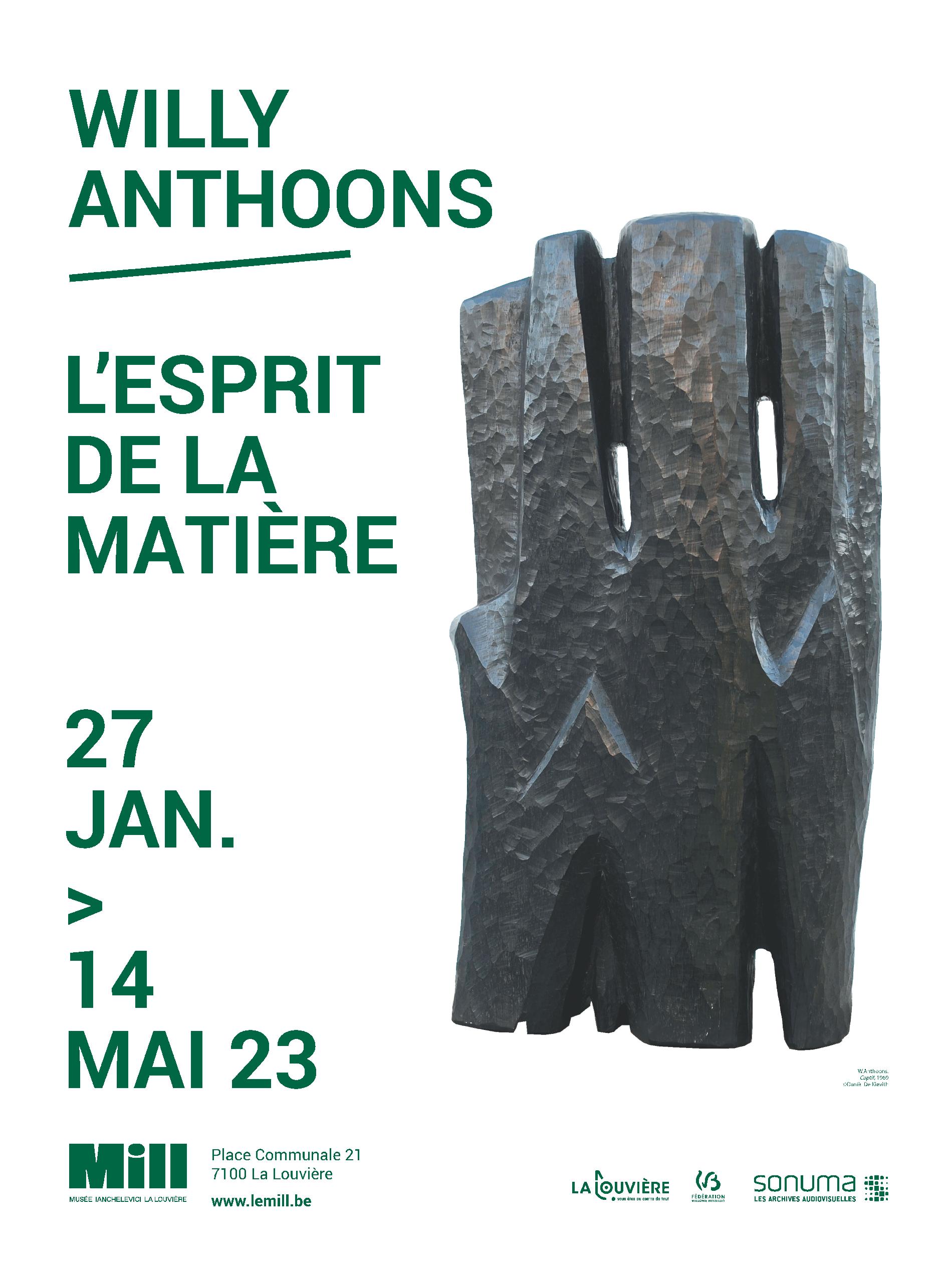